Everyone knows that Spain is famous for tapas. Those small bite sized dishes that go oh-so-well with a cold beer or a glass of wine are just what you need to round off the day. They are also perfect if you want some variety in your evening meal of if you just want a small bite to eat. What many don’t know however, is how much the tapas tradition varies from region to region throughout Spain.

Traditional tapas as we know them hail from the southern province of Andalusia while in San Sebastián and throughout the Basque country in the north, pintxos (pronounced pincho) are more common. So what is a pintxo you ask?

A pintxo is a small, bite-sized portion of food, usually served on a piece of bread or with a cocktail stick holding the food together. Many bars know how to bill you for your pintxos by counting the number of cocktail sticks left on your plate. 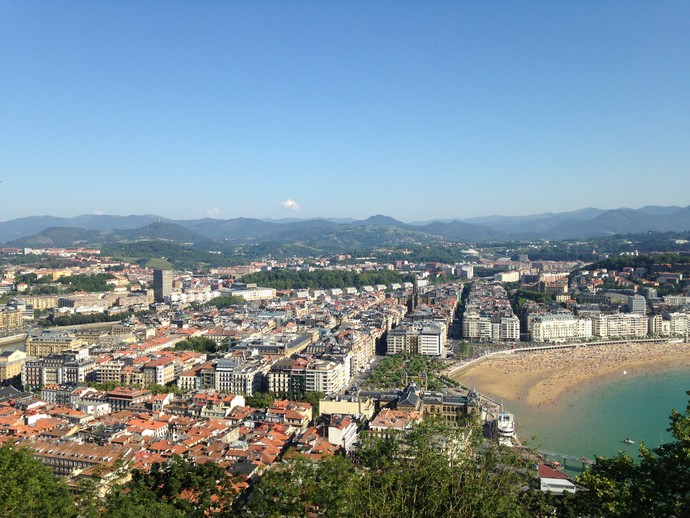 View of San Sebastián with La Concha beach visible in the evening sun.

The second and most important piece of etiquette around pintxos is to know is that pintxos bars often look a bit messy, but this is merely a sign of respect rather than a lack of cleanliness: visitors to pintxo bars show their satisfaction with their meal by wiping their mouths with their napkin and then throwing it on the floor. The more napkins you see on the ground, the more satisfied customers there were!

San Sebastián is the home of the pintxo and the city is a gem of a holiday destination and a must for any food lover: while pintxos may be small in size, they pack a punch in terms of flavour and are a testament to the skills of the chef.

San Sebastián or Donostia as it is known in Basque, is renowned for its restaurants and pintxo bars, so if you’re looking for somewhere to head after a day at the beach, here are five of the best, along with a couple of cocktail bars for you to try afterwards to keep the evening going.

Followed @meanmrcustard's instructions and was not disappointed: "go to La Viña. GET THE CHEESECAKE. SERIOUSLY." #lavina #pintxos #cheesecake #donostia #sansebastian

Located on one of the main thoroughfares in the old town of Donostia, La Viña is a traditional pintxo bars that does traditional dishes but does them well. The dishes here rotate regularly depending on the season, but I tried some classics here, including a Spanish omelette with anchovies and some lightly battered hake that was delicious.

The real star here however is the dessert, and although sweet dishes are not traditionally part of pintxo culture, an exception must be made here. The baked cheese cake in La Viña is lauded throughout the city, and you’ll see plenty of locals chowing down on it after a pintxo or two.

If La Viña is more of an old school pintxos bar, A Fuego Negro reflects the more modern style of pintxo available in the city. Come early for a vermouth and sample some of the more creative pintxos from the mini hamburger with chips to the grilled octopus with purple potato or the savoury ice-cream. The vibe here is more modern than in La Viña but the staff are just as friendly.

I have never gone past Ganbara in the evenings without seeing it packed and with good reason: the wine list is huge and even bigger pintxo menu make it a classic, while the narrow bar spaces mean that it’s easy to strike up a conversation with locals or other newcomers to the pintxo scene. While most of the cold pintxos are visible on the bar when you enter Ganbara, check out the list of hot pintxos and small dishes above the bar for daily specials of rice, fish and meat.

Just a stone’s throw from Ganbara is Bar Cepa, a traditional pintxos joint that locals love. When I went here Rafa Nadal was playing in the Olympics and let’s just the say that the bar wasn’t the place to go for some peace and quiet. It’s a great, friendly atmosphere and the seafood here was particularly great and the impressive collection of bullfighting posters make this bar feel like a time warp in the best possible way.

Another more modern pintxo bar with some seriously classy flavour combinations is the bright interior of Bar Zeruko. The classic dish here is the Bacalao, a Portuguese style of salting cod to preserve it, but other honourable mentions should go to the lobster pintxo and the classic Spanish favourite, jamón ibérico.

Pintxos are usually accompanied for a small portion of golden beer, known as a zurito, or a glass of wine called a txikito and each are just enough to wash down your flavourful mouthfuls. If you are looking for a more substantial drink however, here are a few cocktail bars worth mentioning. These will sell small nibbles but will not be on the same scale as the pintxo bars above. The star of the show here are the drinks themselves.

La Gintonería was a bar I discovered purely by chance when myself and a friend needed somewhere to shelter from a thunder storm one evening, and it is somewhere I will always go back to. Unlike the pintxo bars listed above, the bar is not in the winding laneways of the old town but instead in the more grid-like district of Gros.

Gin has become a trendy drink of late, particularly in Spain where specialised gin and tonic bars, known as gintonerías have sprung up in several major cities. While gin is not the only spirt here, it is very much the centre of attention, with the cocktail menu a careful considered list of complimentary flavours.

Located close the surfer style Zurriola beach, Garbola is a haven for cocktail lovers. While there is an enviable supply of gins in Garbola, they stock a more wide variety of spirits and the cocktail list is extensive and impressive. The martinis here are worth a special mention and while there are some pintxos available here, the drinks are very much the star of the show.