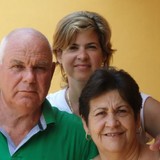 My team and I have been renting for over 10 years
for us it is important that everyone feels at home
Maria Elena will you be prosecute in all help and of course serve a rich breakfast.
The apartment is located in the heart of Havana. Both the Malecon, as well as the Old Town and other attractions, including the Capitol, are within walking distance in a few minutes.

The air-conditioned apartment has 4 bedrooms: 1 room with 3 beds, 2 rooms with double beds, 1 room with 2 single bed.
Each of the 4 rooms has a private, modern bathroom with good water pressure ..

In addition to stylish rooms, there is a large kitchen with direct access to the balcony.

On the spacious balcony, with views of the Galliano-road, on which also is the famous Casa de la Musica, can be excited to watch the bustle of the Cubans.
We are looking forward to your visit

Centro Habana is the smallest but at the same time also the most populous district of Havana, located between Old Havana and Vedado