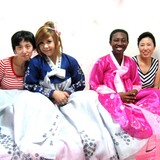 We can talk in Korean while taking a walk on Namsan together almost every day. If you learn Korean, it can be helpful.

*Notice*
Hello
Welcome to Korea
Nice to meet you
Thank you for request. However as you know, the situation COVID-19 is serious in worldwide so we are not sure whether the situation is over in your schedule . So If you want to stay here then please contact me again around one month before the trip. I hope we can meet in Korea :)
Thank you

Our place is a great starting point for Korean travel as well as cultural immersion.
Prepared to welcome their foreign guests with open arm