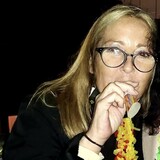 I care about people...

Within a few hours

Hello, my name is Melinda. I have a 16 year old son who is studying in NY and a dog named Roy who only like kids, females and his ball. We have a a single room w/AC leading on to the patio. There is a desk, printer, private bathroom with wifi, and use of the kitchen (dishwasher, washer&dryer) and living room. We live very central. One minute walk to metro or bus, in the neighborhood you can find cafes, restaurants, markets, supermarkets, bakeries, parks, and a 15 minute walk to the beach. We are very relaxed and are here to help you with anything you need. I work from home so I will be available most of the time.. No partying or guest allowed without permission. Alarm in apartment as well.

We live in a very lively area and multicultural. Everything is easy to get to. 15 minute walk to the beach. Here is a list of cultural things to see.

Palau de la Música Catalana, C/Sant Pere més Alt 13. Modernist design by Lluís Domènech i Montaner is a UNESCO World Heritage site, a masterpiece of Catalan's modernist architecture. This auditorium designed by Ramon Muntaner is the most important Modernist example in Ciutat Vella. It was the headquarters of the Orfeó Català, the oldest Catalan choir. The most beautiful part is the stalls with its fine detailing, although all the building is impressive. There are plenty of allegories about music and Catalonia, since the Orfeó Català is strongly bounded with the Catalan Renaixença, the romantic movement that tried to recuperate the Catalan history, language and traditions. It is also the best place in Barcelona to listen to symphonic music. edit

Basilica of Santa Maria del Mar, Plaça de Santa Maria (near the Picasso Museum). One of the most representative examples of Catalan Gothic architecture, it features a sombre but beautiful interior. The upsweeping verticality and lightness of the interior are especially surprising considering the blocky exterior surfaces. Built between 1329 and 1383, it was once was home to a Christian cult in the late 3rd century. The church is dedicated to Saint Mary of the Sea, since the quarter was dedicated to the jobs related to the sea, from sailors to harbor works, commerce, even coin exchange. The inside was burned during the civil war, but it is still very interesting. Next to the church, you can see a monument, called Fossar de les Moreres, which is the place where many fighters where buried after the Barcelona defeat in 1714, so it is an important monument for Catalan nationalism. edit

Carrer Montcada, (near Carrer Princesa, in the Born quarter). This street has the biggest collection of Gothic houses in Barcelona. In amongst these houses is the Picasso Museum, which is definitely worth a visit. There are also smaller museums along the street. There are also several tapas bars here, though they are perhaps a little more expensive than in less popular areas. edit

Passeig del Born. This avenue goes from the Santa Maria del Mar church to the Born market and is where the legendary jousting matches of the Middle Ages took place, as well as numerous fairs and marches. This is also where men were knighted. It is a really old street, very wide for the time.Don Quijote de la Mancha, the famous Cervantes character, had a contest in this place. edit

Mercat del Born. This market was the central market for Barcelona until the 1973 and its closing marked the beginning of the neighborhood's decline before its current resurgence. While undergoing renovations, whole streets and homes from Roman times that had been demolished by Phillipe V's orders were discovered. Archaeologists worked to transform the market in to a new cultural center and history/archaeology museum. Entrance and street level viewing of the ruins is free, but to visit the ruins up-close, and to see the extra exhibits, requires paying for a ticket. free.

Picasso Museum, Montcada, 15-23, closes strictly on time, visitors invited to exit 10 minutes before closing time. Has a lot of art from his first period, before the cubism, but almost none of his most famous works. Pictures are signed only in Spanish, only overview texts for each period are available in English. Do not take laptops or valuables when heading to the museum, luggage over 30x30cm should be left at checkroom, but without any liability. Adults €9, discounted for students having student ID, free on the first Sunday each month. edit

No guest without asking. Always keep door locked with alarm when going out. No parties allowed. Please keep your room neat and the areas that you use. No eating in the bedrooms.