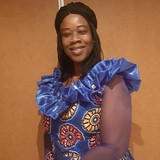 I love to help people, I am a friendly person. I like to make people fill at home.

BEAUTIFUL MEDIUM ROOM WITH DOUBLE BED IN 3 BEDROOM HOUSE, IN DEPTFORD SOUTH EAST OF LONDON ZONE 2, CLOSE TO CENTRAL LONDON. OUR HOME IS 4MINS WALK TO SURREY QUAYS SHOPPING CENTER, 6 MINUTES TO ODEON CINEMA, 2 MINUTES TO MACDONALD RESTAURANT, WE HAVE 3 TRAIN STATION CLOSE TO OUR HOUSE, 5 MINUTES WALK TO EAST LONDON LINE TO HIGHBURY / ISLINGTON , 12 MINUTES WALK TO CANADA WATER FOR JUBILEE LINE TO CENTRAL LONDON. 20MINUTES WALK TO DEPTFORD TRAIN STATION AND DEPTFORD MARKET. 25 MINUTES WALK TO GREENWICH MUSEUM. OUR HOUSE IS VERY CLOSE TO BUS 188 THAT GOES TO INNER LONDON, BUS 47 TO INNER LONDON WE HAVE OTHERS 9 OTHER BUSES GOING TO DIFFERENT PART OF LONDON ALL BETWEEN 4 TO 8 MINUTES WALK TO MY HOUSE . WE HAVE 2 TOILET/BATHROOM IN MY HOUSE, MEDIUM KITCHEN, LARGE GARDEN, 2 SPACES FOR CAR PARK. OUR HOUSE WAS BUILT IN YEARS 1995 IN A VERY DECENT AND QUITE/PEACEFUL AREA. THERE ARE LOT OR RESTURANT, SHOPS, SUPERMARKET BANK CLOSE TO MY HOUSE BETWEEN 5-10 MINUTES. I LOVE COOKING. I AM A GOD FEARING PERSON, I AM VERY FRIENDLY, ACCOMODATING, PEACEFUL, SMILING, LOVE TO MEET PEOPLE FROM DIFFERENT BACKGROUNG. I TREAT PEOPLE AS INDIVIDUAL, WITH RESPECT AND DIGINITY.

OUR HOUSE IS LOCATED AT DEPTFORD BOUNDARY BETWEEN SE8 AND SE16, AS DESCRIBED ABOVE. OUR HOUSE IS BUILT IN VERY DECENT, QUITE AREA, VERY CLOSE TO BUS 188 , 47, 199, EAST LONDON OVER GROUND TRAIN, AND JUBILEE LINE THAT GOES TO THE CITY.

PLEASE KEEP OUR HOME SECURE AND CLEAN, DOUBLE LOCK THE FRONT DOOR WHEN ENTERING AND LEAVING THE HOUSE. IF YOU NEED ANYTHING IN THE HOUSE ASK ME PLEASE. FEEL FREE TO USE THE PROVIDED THINGS IN THE KITCHEN WHICH I WILL SHOW YOU WHEN YOU COME IN BUT PLEASE CLEAN UP AFTER USED. KEEP NOISE TO A MINIMUM AFTER 10 PM. PLEASE DO NOT INVITE STRANGER INTO MY HOUSE. IF YOU WANT TO INVITE YOUR FRIENDS IN PLEASE AGREE WITH ME FIRST. MOST IMPORTANT NO SMOKING IN OUR HOUSE. DO ENJOY YOUR STAY WITH US AND TREAT OUR HOUSE AS YOU WOULD WITH YOUR OWN HOME. IF YOU ARE NOT SURE OF ANYTHING PLEASE ASK ME,