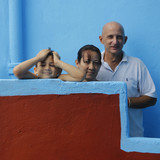 This is a private apartment near Capitolio. If you want to enjoy an authentic Cuban experience, not only a tourist illusion, then this is your choice. Located in a newly renovated house, in a safe neighborhood, a couple of minutes from Habana's busy shopping street - you can enjoy perfect privacy. The very well ventilated apartment has three separate rooms, two bathrooms with hot and cold shower, a kitchen, a balcony and access to a private roof with a panoramic view of La Habana. A very nice Cuban family is ready to host you and help you with all your travel needs. A vintage American car with a driver is available to rent to pick you up from the airport for 30 eur or to take you on day trips to the beach, or to any other destination. We provide a Cuban breakfast for 5 eur extra.