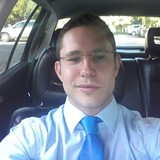 An outgoing guy travelling with his awesome girlfriend. Looking to explore the world. We are both professional people I work in finance and IT governance.