8 Reasons to Make New England Your Next Vacation

The United States is a massive country, so if you're thinking of taking a vacation in the US, it is important to pick the area that best fits your desired vacation. Here are eight reasons that show why New England is the perfect place to visit. New England consists of Connecticut, Rhode Island, Massachusetts, Vermont, New Hampshire, and Maine

If you're looking for the classic, big American city, Boston is your go-to stop. Boston is a city of history while still being a modern hub. Museums like the Museum of Fine Arts, the Museum of Science, and the Boston Children's Museum are just a few of the many visit-worthy museums in the city. Popular things to do include shopping at Faneuil Hall, visiting the New England Aquarium, taking a tour on the Duck Boats, or watching a baseball game at Fenway Park. 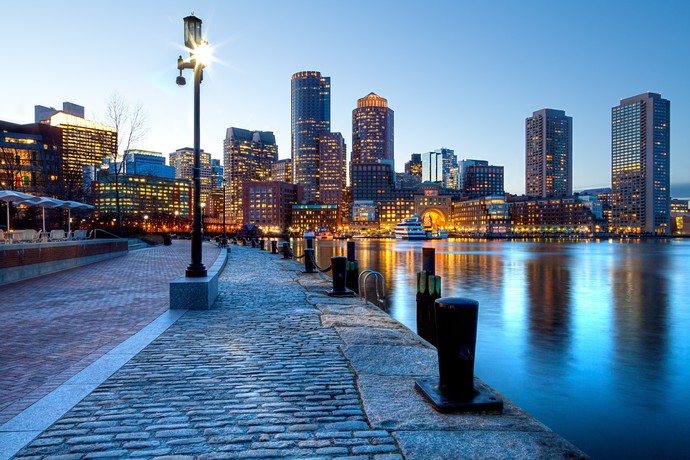 If you're looking for a coastal port town, Portland, Maine is the perfect city to visit. It's iconic lighthouse and incredible restaurant options are definitely worth a visit.

In the northwestern part of New England you will find Burlington, Vermont. Vermont is the perfect state for leaf-peeping in the fall season. Burlington itself is known for its wide variety of restaurants found on Church Street and its beautiful view of Lake Champlain.

If you enjoy looking at lavish homes, Newport, Rhode Island is the perfect destination. It is known for the old mansions sprawling along Bellevue Avenue. A great way to experience Newport is by walking the Cliff Walk.

Heading south is Hartford, Connecticut. There, you can visit the Mark Twain House or head to the Wadsworth Atheneum. The Connecticut Science Center is also a notable place to visit for all ages.

New England has too many trails to count. In New Hampshire, the White Mountains offer a wide variety of hikes for both beginners and advanced hikers. Popular spots include Mt. Washington, the highest point in New England (which is known for its unpredictable weather patterns, such as snow in the middle of summer), the Franconia Ridge, and the Presidential Range. Popular skiing locations include the North Conway and Lincoln areas. 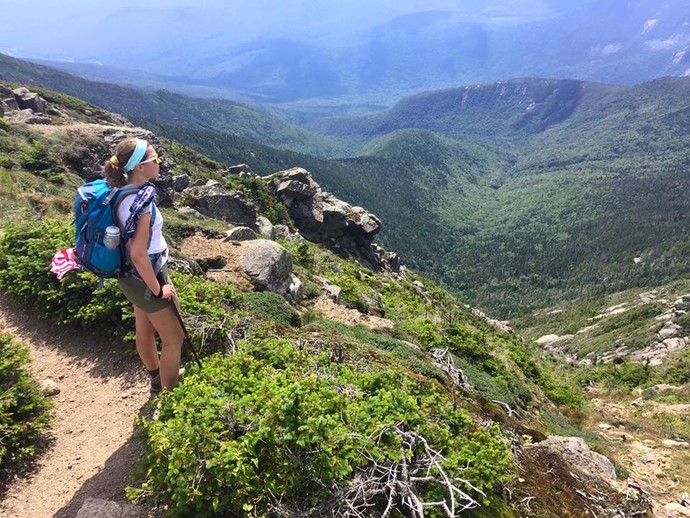 Two popular parks in Maine are the Acadia National Park and Baxter State Park. Acadia is located on the coast of Maine, and hiking early in the morning Cadillac Mountain will provide the best sunrise experience. Baxter State Park features Mt. Katahdin, known for its Knife's Edge Trail, which has hikers walking across a narrow ridge to the peak.

Vermont, meaning "green mountain," is home to the Green Mountain National Forest. Notable hikes include Mt. Mansfield, the tallest mountain in the state, and Camel's Hump, which provides arguably the best views in the green mountains. Skiing and snowboarding are popular in Stowe and the nearby towns.

New England is known for its fierce love of sports. You can catch a game of American football at Gillette Stadium in Foxborough, Massachusetts and root for the Tom Brady (often referred to at the GOAT) and the Patriots. Or perhaps head into Boston and root for the Celtics (basketball) or the Bruins (ice hockey) at the TD Garden. The Red Sox (baseball) can also be found playing at Fenway Park in Boston. In Vermont, you can catch a local game of Lake Monsters at Centennial Field.

New England experiences a wide variety of weather and seasons. There's the summers that reach temperatures of 100 degrees Fahrenheit/37 degrees Celsius, winters that can drop to -40 degrees (both Fahrenheit and Celsius). However, know that those are rare extremes. 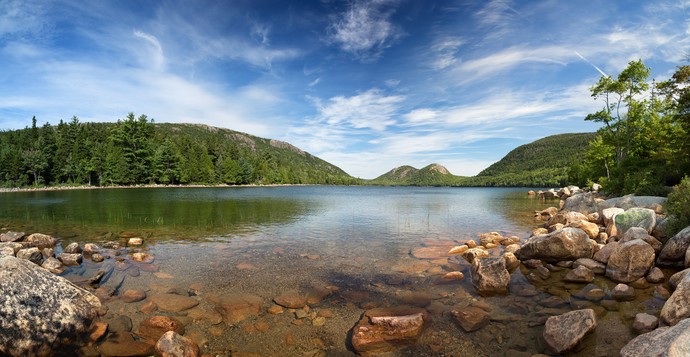 Winter in New England means snow, and lots of it. Strap into your ski boots and head up to the mountains, or grab a tube and go sledding down a local hill. Outdoor ice skating rinks, snow shoeing, and gathering around the fire are the perfect ways to spend winter. If you're in New England in the winter, be excited for some snow.

Fall is probably New England's most known season. From September-November, the changing colors of the leaves turns New England into a fiery landscape of orange, red, and yellow. Every year, leaf peepers come to New England to witness the natural beauty of the fall season here. And what's a New England fall without cider and apple picking?

"April showers bring May flowers" really comes true in the spring. The snow melts and soaks the ground, and the raid turns New England into a very wet place to be. However, the blooming of the flowers and buds on the tree is an absolutely stunning site to see.

Summer in New England is a treat. Beaches line the coast, such as Ogunquit, Hampton Beach, and Cape Cod. Being on the western side of the Atlantic Ocean also means watching spectacular sunsets over the ocean, if you're willing to get up early for them.

No one truly knows why so many bridges were built to look this way. Some say it was to protect beams from rotting, while others say they were built to look like barns in order to calm animals walking over the bridges. Either way, covered bridges are found all over New England. Going through them is like going back in time. They can be found on road, walking trails, and cycling paths. 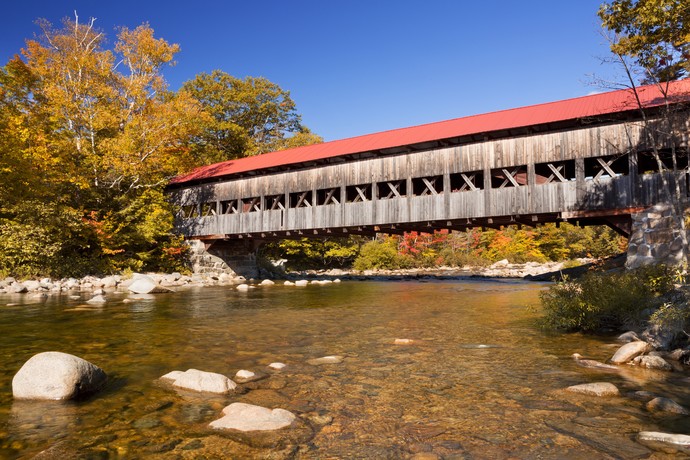 Depending on where you go in New England, the slang changes. In Vermont, a soft serve ice cream is called a "creemee." In Massachusetts, a shopping cart often gets referred to as a "carriage." Roundabouts are often called "rotaries" and you can find someone doing a U-turn calling it "banging a U-ey." "Wicked" is synonymous with "very," and "jimmies" means "sprinkles." It's not a "remote control," but rather a "clicker." New England loves Dunkin Donuts coffee, so you'll find towns close to Boston calling it "Dunks" and the rest of New England referring to it as "Dunkin's."

Being one of the first places settled in the United States, New England is full of history. There's Salem, Massachusetts, which is infamous for the Salem Witch Trials which took place in the 1690's. Further north is Newburyport, which was once a shipbuilding town that now bustles with port town charm. Charleston, New Hampshire was the northernmost fort of the British. Almost every town in New England has a unique history that locals love to boast.

We caught some fall color in the Granary last week! Visit us and see it before it's gone! ☀️ • : #FreedomTrail Player Tim Hoover

We've already mentioned the Vermont creemee, but there's so many more staples to New England food. First, every day always starts with a run to Dunkin' Donuts. It is not uncommon for drive-thru lines to snake all the way around the building. And of course, iced coffee is drank year round, and munchkins are a must. Vermont is also known for its maple syrup, having had a long rivalry between New York and Canada to see who can produce the best. In Maine, lobster is a must. Although lobster is found all throughout the New England coast, it has become an staple dish of Maine. Traveling south to Massachusetts, you have to try the clam chowder (or as Bostonians say, "clam chowdah"). Other staples include fresh haddock and roast beef sandwiches (which will be unlike any roast beef sandwich you have had before).

Thanks for the love @northshoremag !! “Kelly’s Roast Beef got its start almost accidentally. Frank McCarthy and Raymond Carey ran a hot dog stand on Revere Beach and worked in a local restaurant as well. One day, a wedding party cancelled on the restaurant, stranding it with many pounds of roast beef. McCarthy and Carey turned the meat into sandwiches and sold them at their hot dog cart. “And then you had the creation of world-famous Kelly’s Roast Beef,” says Dan Doherty, vice president and director of operations for the company. Since that fateful day, Kelly’s Roast Beef has expanded its menu to encompass lobster rolls, cheeseburgers, pastrami, and soups and salads, alongside the requisite hot dogs and roast beef. It has grown its footprint as well: After operating out of Revere alone for more than 40 years, the business opened a location in Saugus in 1994. Since then, the chain has added shops in Natick, Medford, and Danvers, and even debuted a food truck this past summer. Locals aren’t the only ones who have noticed Kelly’s. The restaurant’s signature roast beef was featured in the PBS documentary Sandwiches That You Will Like and on Rachael Ray’s $40 A Day. Despite these brushes with fame, however, Kelly’s has remained dedicated to its founding mission, Doherty says. “We haven’t changed our recipes and our portions,” he says. “We’ve come up with some new items, but we’ve stuck to our roots.” 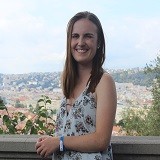