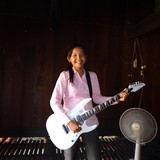 My name is Pheaktra, originally I was born in Siem Reap Province, and I am married. At present time we are living and working in Chreav village, Sangkat Chreav, Siem Reap-Cambodia. I am a local kindergarten teacher, I teach kids age from 3-6 years, they are cute! I am running my homestay on my own now after my director left because he is too busy with the Information Center for Community (ICC), and beside working as a kindergarten teacher I am also a local tour guide in my village, I like both tourism and education work, therefore I have set up this Homestay work, and I am very much opened to the world communication, and I am ready to share my Khmer Culture with all kinds of guests who come to stay at our house.

Thank you very much for putting your consideration on choosing our Homestay Chreav to serve you.

I believe staying with us, you are not only knowing the area of Siem Reap, but you also know better about our Cambodian culture as well.

With My best regards,

Location 1
It is located only 200 m from ICC Association and Chreav Police Post and as such is only 6km or a 15 minute bike ride from the city centre.

By staying in the home stay you don’t only support the family but also have a positive economic impact on the whole village.

We can see at homestay