Istanbul is an area that in so many senses is a meeting of cultures, a city that is half in Europe, half in Asia. Visits to the city’s famous monuments and palaces may showcase the city as a melting pot throughout history but nowhere is this more evident that in the food that is on offer.

As Turkey is such a large and diverse country the flavours and dishes vary, with many of Istanbul’s restaurants specialising in food from specific regions of Turkey. In addition, Istanbul’s location along the Bosphorus, stretched between Europe and Asia makes it a brilliant location for those looking for any kind of fusion food or to sample flavours from East and West. Here then is a run down of breakfast, lunch, dinner and beyond in this stunning city. 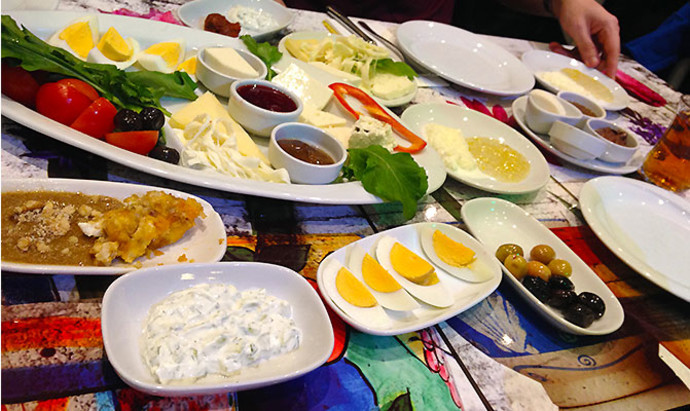 Istanbul is a big city and to get around it, you're going to need a good breakfast. Breakfast in Turkey can be light or as heavy as you like but to set yourself up properly, try the eggs menemen, which is made of onions, tomatoes and green peppers cooked together with scrambled eggs. Cheese, honey, bread and savoury pancakes called gözleme are also common breakfast menu items. Try Van Kahvalti Evi on Defterdar Yokuşu in the Cihangir neighbourhood.

Cihangir is a very boho area with cafes and restaurants peppered across the neighbourhood. The seemingly unremarkable Datli Maya is an eco-friendly café that uses an eighty year old wood-fired oven to make pide - the Turkish version of pizza.

Another option is to head down to the quayside by the Galata Bridge in Karaköy where you can indulge in some freshly caught fish barbecued and served in a sandwich.

On the Asian side of Istanbul, Çiya, a restaurant nestled in the market streets of Kadiköy has been lauded everywhere from TripAdvisor to The New Yorker as having some of the best food in Istanbul. The restaurant serves everything from traditional shish kebabs to hot stews, warm salads and some delicious desserts to top it all off. Try the candied fruits (and vegetables!) that are on offer for an authentic Turkish dessert.

Sometimes you don’t want a sit down meal at every stop on your holiday, you just want a bite to eat. Other times after a night out all you want to do is to eat. For both these reasons the world loves kebabs. Dürümzade located on a quiet corner off the shopping street Istiklal Caddesi may not be much to look at, but it has some of the best kebabs in the city.

If it’s something sweet you’re after try some of the city’s famous elastic ice-cream. Think of it as being somewhere between Italian gelato and a 99 cone.

Kebabs don’t have to just be street food and most restaurants in Istanbul will have shish somewhere on their menu. For an altogether higher class kebab, head to Zubeyir, a two floor grill-style restaurant. Kebabs are the focal point of the menu but you can also get chicken wings, ribs and of course the local drink, raki.

For something with a more contemporary vibe, Antiochia Concept near Şişhane has both the old-new ambiance that defines Istanbul with some brilliant flavours of south and eastern Turkey. The staff here are more than happy to recommend what’s best off the menu and it’s a great spot for a large group of diners. The meze (small dishes to accompany bread) are particularly great here.

The restaurants behind the fish markets in the Beşiktaş area are another great place to find really local authentic cuisine, and the prices are exceptionally reasonable too. These places have a lot more of an old-school vibe to them however: think The Sopranos, only with fishermen!

If you'd rather something a little left of field, try Miss Pizza in Cihangir. The Turkish owner travelled to Naples to learn how to make pizza and took his recipes back to Istanbul. The result is an amazing fusion of Turkish flavours with a traditional Italian pizza base. 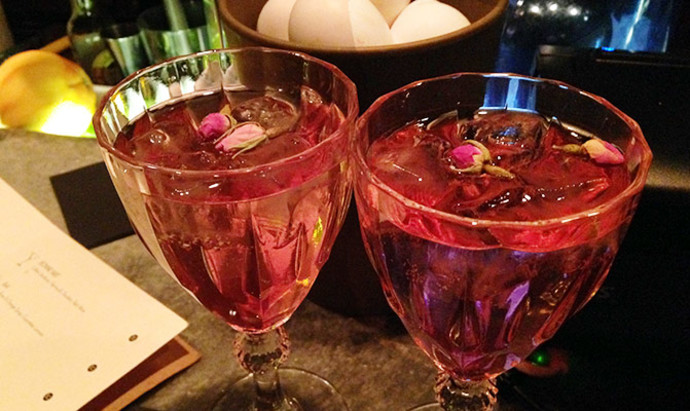 Istanbul is a great city for a cocktails with plenty of hotels with rooftop bars to make the best of the city’s views. Although it may seem like an unusual suggestion, the Goethe Institut has a brilliant view of the city and the Bosphorus from its rooftop bar and restaurant. Hop back to the Cihangir neighbourhood to try Geyik, a small but slick coffee and cocktail bar that comes complete with its own sleepy cats to add atmosphere.

For something that feels a bit more Old World try the Büyük Londra, also known as the Grande Hotel de Londra on Mesrutiyet Caddesi. With former guests including Ernest Hemingway, the hotel has a feeling that is part Fawlty Towers, part Agatha Christie. The talking parrot in the bar and the brightly-coloured furniture feel both plush and kitsch at the same time. The prices for drinks are pretty reasonable too.